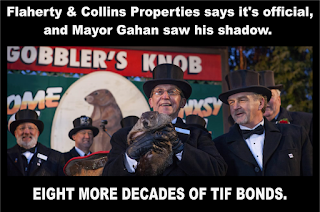 This one, from KLB:

"Too bad the developers got a massive TIF handout and didn't pay into any of the fire protection they got."

Of course, we're speaking of the the Saturday conflagration.

The Breakwater fire: Luckily there were no injuries, but are we REALLY sure the deity favors subsidized luxury?


By afternoon yesterday, the Elm Street side of the apartment complex had completely disappeared. As we await the implications of rebuilding, which the Green Mouse predicts will include a reformat of the phase-in of the downtown grid project, as streets must be kept nice and wide to facilitate fresh new matchsticks being trucked to the site, have you noticed that the Indy developer was lightning fast in assuring all and sundry that the complex was built to code?

“Fortunately, as the B building was not yet complete and unoccupied, no one was injured,” Michael Collins, Regional Property Manager for Flaherty & Collins Properties said. “We’re working to determine what caused the fire. There were no sprinklers on, which was to code because the building was incomplete and had not yet been issued a certificate of occupancy.”


Has someone suggested it wasn't?

Perhaps the mayor will have something coherent to add to all this (Vegas, do we have odds?), having been silent since Saturday morning.

Let's be charitable. After all, Team Gahan needs time to nurse the inevitable hangover from a weekend spent problem-drinking Bud Light Lime. The unfortunate Breakwater fire is the first major crisis of the current management's tenure, and as the Academy Awards demonstrated, there are those times when things are not as they seem. 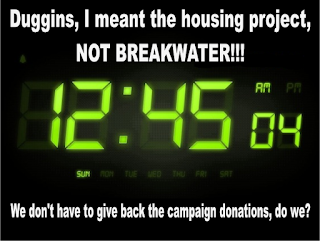