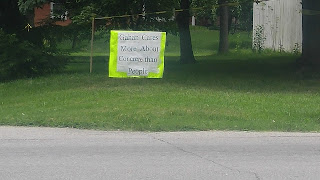 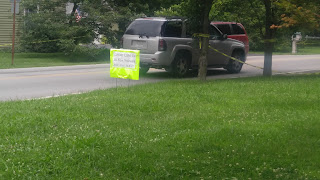 John Rosenbarger sat at his desk. Outside his door, the clamor of the peasantry could be heard amid the clatter of pitchforks.

He spat, then threw back his last shot of fiery sarsaparilla.

“The grandeur of my physique, the complexity of my worldview, the decency and taste implicit in my carriage, the grace with which I function in the mire of today’s world – all of these at once confuse and astound the buffoons at Mt. Tabor and Klerner Lane."

Rosenbarger gazed at his reflection in the framed portrait of Robert Moses.

Nearly 20 New Albany residents turned out at the New Albany City Council meeting Thursday to voice their concerns over a project that will widen Mount Tabor Road. New storm grates would mean drainage would go directly into the creek in the residential area.

Harvey Hamilton, who lives on Creek View Circle just in front of the creek, said he's been there 34 years and only started seeing issues four to five years ago.

“Silver Slate Creek starts right behind our house,” he said. “There's about a six or eight-foot pipe there that dumps where the creek starts. Now we've had five trees that have lost roots and washed across the creek. The cable people and the electric people moved their boxes up on the street.

“We're losing ground and losing trees. We appreciate anything you can do for us.”


For one resident, Team Gahan's congenital secretiveness has made the problem worse.

“It was my knowledge that plans for such projects have to be public, located somewhere within the county building where people who were affected could come and take a look at them and to my knowledge these people have said they've had trouble locating said plans."


6th district councilman Scott Blair, who helped the neighborhood slay the nasty Rosenbarger Roundabout back in '13, assured his constituents that he'd sponsor an openness resolution in council -- though he'll need to consult his Mutable Principles Book to see whether he can vote in favor of his own idea.

(Blair) wants to initiate a public meeting with the project engineers to keep the people updated on any changes that have been made and to refresh anyone's memory on the project that was initiated three years ago.


Bankers; you can't trust 'em, and even North Korea won't take 'em off your hands.

“I still go back to $600,000 for WiFi for downtown. How far would that go to help this problem and that only goes to benefit very few people.”

The roundabout was removed from the plan in 2013, and the sidewalks are needed, but not unless the overall intent is narrowing lane widths and slowing traffic. These people rightly fear that road "improvements" will attract further traffic and make their drainage issues even worse. It's hard to argue against this point of view, but Jeff Gahan -- perhaps NA's least communicative mayor ever -- doesn't even try.

Hence the signs, and the pitchforks. If only we'd start using the latter.