Lenin's head finally is located, and will be displayed in Berlin.

The story of the toppled 60-foot tall statue of Vladimir Ilyich Lenin that formerly stood in East Berlin where the Volkspark Friedrichshain (extant) faced Leninplatz (defunct) is such a central part of my personal travel mythology that I've long since abandoned any effort to be rational about it.

One year ago today, we boarded a plane from Newark bound for Berlin, where there was a pilgrimage to the pedestal: 2014 Euro Reunion Tour, Day 4: To Leninplatz and the Imbiss, 25 years later.

Just before departing last year, the statue's "remains" were the subject of a hot dispute (see the full text below), but now Lenin's head has been found, and will be featured in the exhibition after all.

Giant head from Lenin statue unearthed for exhibition in Berlin; Statue of former Soviet leader was buried after fall of Berlin Wall in 1989. His head will be displayed in the city’s Spandau district (Reuters, via The Guardian)

Twenty-four years after it was buried, the head of a giant statue of Soviet revolutionary leader Vladimir Lenin was dug up from woodland on the outskirts of Berlin on Thursday to be displayed at an exhibition in the German capital.

The monument was unceremoniously torn down two years after the 1989 fall of the Berlin Wall. Its demolition, depicted in the German blockbuster movie Good-bye, Lenin!, became a symbol of the end of East Germany and downfall of Communism in Europe.

August 21, 2014:
The Berliners came to bury Lenin, not exhume his statue. But I remember it well. 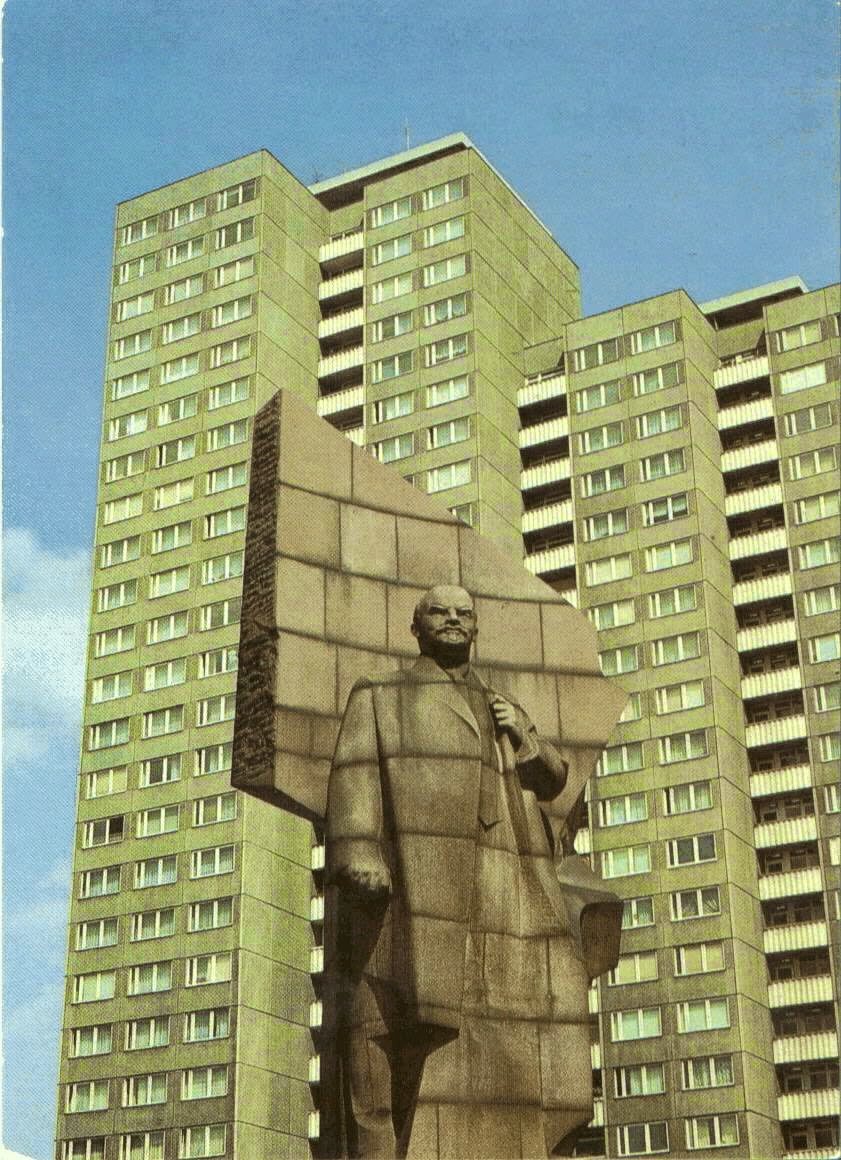 As it looked then.

It was 25 years ago this month that I was in East Berlin, tidying the vicinity of this very decapitated statue in preparation for the celebration of East Germany's 40th birthday, at which Mikhail Gorbachev famously wagged his finger at Erich Honecker.

Berlin's giant Lenin statue may have been lost, say city authorities; Monument torn down in 1991 was buried and cannot be dug up for exhibition, according to officials, by Philip Oltermann (Guardian)

It was the star of Good Bye Lenin, Wolfgang Becker's tragicomedy set around the fall of the Berlin Wall: a statue of Vladimir Ilyich Lenin, suspended from a helicopter, seemingly waving goodbye to the crumbling socialist republic.

But more than two decades after it was torn down, Berlin authorities have admitted the giant monument may be lost in storage.

Curators of an exhibition about the German capital's monuments had proposed including the Russian revolutionary's 1.7-metre (5.6ft) head in their show, scheduled for spring 2015. Between 1970 and 1991, the statue had stood on Lenin Square in Berlin's Friedrichshain district. After its removal, it was cut into 129 pieces and buried in a pit in Köpenick.


My work duties at Leninplatz and the adjacent Friedrichshain public park as a temporary employee of the East Berlin Parks Department, culminating in a beer with Vladimir Putin in Dresden, were documented previously at NAC way back in 2008 (and revised in 2014 for reposting).

Pilsner, Putin and Me (Part One).

Pilsner, Putin and Me (Part Two).

Pilsner, Putin and Me (Part Three).

Pilsner, Putin and Me (Part Four).

I'll be back in Berlin soon for the first time in 15 years, and plan on visiting the empty space.