Habitat for Humanity lashes back at Gonder as city's 922 Culbertson position becomes even more muddled. 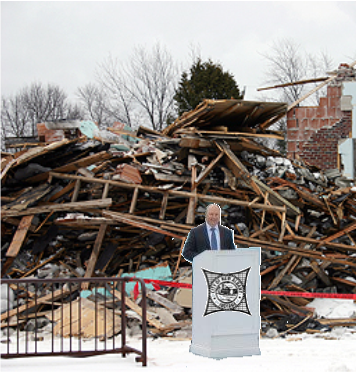 First, there's another "new plan for (the 922) Culbertson Avenue building in New Albany," even as "the city (is) still proceeding with (the) demolition process."

This implies that there was a previous coherent plan on the city's part, and any interest in transparency. The current administration's inability (or unwillingness) to enunciate policies and decisions with clarity remains baffling.

It also posits a mildly Orwellian paradox (demolishing something in order to save it), but let's not quibble with the city's ever-shifting resolve to do or not do something, depending on this morning's latest Ouija board reading over Sanka back at the ranch.

New Albany Building Commissioner David Brewer has granted preservationists a stay of the demolition of the Circa-1880 building at 922 Culbertson Ave ... apparently there’s another option that has at least bought preservationists more time.


That'd be Plan 9 from Outer Space, and now that we don't have THAT cleared up at all, let's move to Andrea Stevens, executive director of the New Albany-Floyd County Habitat for Humanity, who bristled when councilman John Gonder differed with Habitat's record.

... First, the notion that there exists any sort of plan for Habitat homes at 922 Culbertson is simply not true. Whatever the origin of that speculation, Habitat has not pursued any interest in this property, nor have we been approached by the city or any other party regarding the redevelopment of that property. That inaccuracy aside, what is more troubling is that the comments reveal the persistence of the unfortunate misconception that the Habitat houses somehow detract from the vibrancy of a neighborhood or even perpetuate poverty or the appearance of it.


For the standard defense of Habitat, read Stevens' column in its entirety. Noting that in my world, just knowing that H4H is a Christian ministry, albeit ecumenical, is enough to send me to the fridge for another beer, there remain other reasons for reasonable people to differ with the organization's record, whether in design or workmanship.

As a convenient example, consider this case in Syracuse, New York. I've underlined the passage that says it all.

The nonprofit agency provides affordable houses for people who could not otherwise buy their own home, and it does it with donated money and volunteers. It’s not a mission that would seem to invite criticism.

But Monday, there he was, standing before the Syracuse Planning Commission, asking it to deny a Habitat request to combine two parcels into a single lot so it could build a ranch style house in the 1300 block of West Onondaga Street ...