Random 2013 Platform Goals 2: Can we agree on a riverfront plan, please? 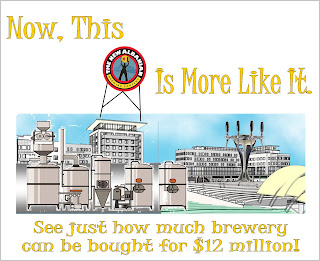 For the second installment of Random 2013 Platform Goals, we consider the current state of affairs on New Albany's downtown riverfront.

Apart from the Greenway, the YMCA (Scribner Place, Phase Only) and the new Amphitheater roof, very little has changed there in the eight years this blog has been functioning.

Today's news story (below) helps to bring the city's ongoing riverfront conceptual vacuum into sharper focus. It's tempting to roll one's eyes at another big-time development group refusing to show us the money, but at the same time, New Albany Horizons has a point of sorts.

Indeed, the planet stopped spinning for two (three?) years as we rushed to gift Mainland Properties with various keys to the city as pertains to its ever-mutable (and apparently, entirely unfunded) River View plans. Now the olive branch is withdrawn, and Horizons gets its deferred turn to convince someone/anyone there's any there, there. A bank account might be a nice first step.

To me, it reveals an even larger, perhaps congenital problem. There are numerous development plans on file, all of them addressing the riverfront's future. But there is no row-in-one-direction cohesion as to what might actually be expected to happen.

The anarchy is exacerbated by the usual small-pond turf wars. Successive mayoral administrations say one thing, councils do another, and the redevelopment commission something else again. More importantly, since the last two riverfront development plans minted by for-profit, non-governmental bodies (Mainland's and Horizons) called for condos, it might behoove us to check with the city of New Albany's overall housing master plan.

Well, is there one? If so, what's it have to say? If not, shouldn't there be a plan, or is our only strategy to lay in stocks of lubricant whenever private "partners" come calling?

And maybe is would be constructive to exercise leadership on these points -- although a return to the England administration's top-down, crony-enrichment bludgeoning is not welcomed.

NEW ALBANY — Developers who once proposed a $30 million project in downtown New Albany want to know the city’s vision for the riverfront area before proceeding with any investments.

On Tuesday, the New Albany Redevelopment Commission extended the due date on a mortgage note for six parcels of public property off Bank Street owed by the group New Albany Horizons LLC. In 2008, the commission agreed to sell the parcels to the group for $107,500, with final payment due by the end of this year. So far, the group has only paid property taxes on the lots.

New Albany Horizons already owns land around the public property, and eyed the parcels as part of its plan to construct residential, commercial and office space near the corridor of Bank and Main Streets.

Carl Holliday — a partner in New Albany Horizons — told the redevelopment commission Tuesday the group hasn’t started the project because of uncertainty over what will be developed around the property.