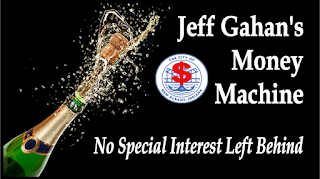 Some people scuba dive, but during the coming weeks we'll be plumbing the depths revealed amid eight years of the Committee to Elect Gahan's CFA-4 campaign finance reports. Strap in, folks -- and don't forget those air(head) sickness bags.

A few thousand dollars here, a few more there ... fish bowl at the fundraiser, manila envelope under the mattress ... multiply the bounty by eight lucrative annual fundraising cycles ... and pretty soon, we're talking about real money.

The heavy hitters have been revealed. Here are six mid-range donors, their cumulative totals, and a pleasant golfing digression.

Lochmueller Group, Dean Boerste
Out of towners
Evansville-based engineering and wastewater consultants. The fiefdom of Dean Boerste, described to the Green Mouse as "the Warren Nash of Tell City." Ouch.
Total: $5,750

Ironically, at the Covered Bridge Golf Course web site there's a testimonial by Ecotech's Bryan Slade about the great success of a corporate golf outing. In 2015 both Robert Iezzi (Covered Bridge CEO) and the legendary Frank Urban "Fuzzy" Zoeller Jr. dropped $400 into the GahAnTM -- and also in 2015, with Gahan having surreptitiously funded a renovation for Valley View Golf Course, Laurie Kraft of Valley View handed back $650 to the mayor. Golfing combined total: $1,050.

And not to omit our good friends at Flaherty & Collins
Out of towners
Indy-based nationwide developers of apartments; with the help of Gahan's TIF subsidies and sewer tap-in waivers, Flaherty and Collins built the Breakwater -- twice.
Total: $2,250

You may have been wondering about unions, a traditional source of funding for Democratic candidates. There have been a few union donations to Gahan, most of them made during 2011 and 2012, and the most recent in 2015. It's a relatively paltry sum, leading observers to speculate just how helpful Gahan's "economic boom" has been for unions.

Perhaps the mayor's current efforts to squelch unionization at the wastewater treatment plant are a more accurate barometer of his (un)helpfulness to working people.

The single biggest personal contribution from someone who remains untraceable is $3,500 from Adam U. Kahn in 2014. Nothing before or since.

We have absolutely know idea who he is or why a guy from New York City would give this much money to a hack politician from New Albany.

It should be obvious by now that nepotism is a huge part of New Albany politics during Our Time of Extractive Gahanism. As such, donor roles sometimes overlap and become intertwined, as with the family members of a son-in-law appointed to a city job, the brother-in-law assigned to a board, and so on.

Just the same, here are two lists of people who work for Gahan and also give to Gahan. They're the ones who'd prefer all paradigms remain static.

First, the department heads, appointees, board members and various other higher-ups.

Then, a handful of rank-and file; most of them are police and fire. I've combined them, and may have missed one or two: Seven donors, 11 separate donations over an 8-year period.

Coming next in Part 20, a summary. Then we move to the expenditures side of the ledger.

Rebuttals are welcome and will be published unaltered -- so don't forget spellcheck. If you have supplementary information to offer about any of this, please let us know and we'll update the page. The preceding was gleaned entirely from public records, with the addresses of "individuals" removed.
Posted by The New Albanian at 3/21/2019 01:41:00 PM