It's good for special interest campaign donors, but "Is a Top-Down Approach the Best Way to Revitalize Downtown?" 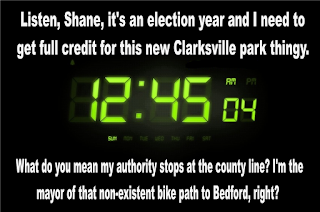 From the top, down -- you know, the same way water and debris washes down the side of the Summit Springs development whenever it rains.

Is a Top-Down Approach the Best Way to Revitalize Downtown? by Daniel Herriges (Strong Towns)

The scars of 1950s urban renewal still haunt many American cities. Among them is Richmond, Virginia, where a section of downtown called Navy Hill, at one time a thriving African-American community, was decimated to facilitate the construction of Interstate 95 and, eventually, make way for the Richmond Coliseum.

Now, Richmond is weighing a controversial project to reinvent Navy Hill in one fell swoop yet again, this time through a partnership with a private developer to do a billion-dollar redevelopment of 10 blocks of city-owned land. The resulting master-planned entertainment district would contain a brand-new stadium and event venue, hotel, food hall, and some 2,500 housing units—funded in large part through tax increment financing (TIF) that would commit a major portion of future property taxes not just from Navy Hill but from a surrounding area eight times as large. Local critics have questioned the expansiveness of the TIF district, and whether Richmond is mortgaging too much of its future on this project.

Strong Towns was invited to submit an op-ed to Richmond Magazine explaining why we think this is a huge gamble with a high opportunity cost—and the city should consider more incremental approaches to achieving the same ends of revitalization and increased wealth. Here it is. The below article was originally published in Richmond Magazine, and is reprinted here with permission.


There are incremental, neighborhood-oriented alternatives. They don't generate the same volume of cash for incumbent mayors; then again, maybe people living in neighborhoods should be the first objective and not fat cat donors living in Carmel.

A city like Richmond can do a lot to support and accelerate more organic forms of growth. At Strong Towns, a national advocacy organization that supports a model of development that allows cities to become financially strong and resilient, we call this model “Neighborhoods First.” There are hundreds of small investments in quality of life, vitality and public safety that the city could make right now, and we’ve found that it’s often these projects that deliver the highest return on investment for a local government’s scarce resources. A humble crosswalk, some street trees and a facade grant can bring up property values and begin virtuous cycles of private reinvestment. Technical assistance and workforce development efforts can give homegrown entrepreneurs a boost.

These investments are modest individually, but transformative in aggregate, because they respond to immediate needs.

Cities across the country are starting to realize that the “big project” approach takes up too much staff time, wastes too much political energy and distracts too much from the basic needs of existing neighborhoods. Risky, low returning projects too often become expensive boondoggles that haunt a community for decades. Public officials everywhere are desperately seeking an alternative.

Neighborhoods First; A low risk, high return strategy for a better Brainerd is an example of how a community can grow stronger by making small, incremental investments over time. By observing how neighbors live their lives, by asking them where their daily struggles are, by getting out on the street and discovering what is actually going on, any local government can discern what their community’s pressing needs are. These projects are the high return investments and they are all around us.


As an example, think back to Mayor Jeff Gahan's secession from the NA-FC Parks Department, and our subsequent TIF-impelled expenditure of somewhere between $18 and $25 million to construct bright, shiny, big-ticket, park-like objects. At the time many of us offered the alternative of using half (or less) of the money to scatter smaller park areas throughout the city's neighborhoods, in places where potential users could walk and ride bikes and not be compelled to rely on their cars to reach centralized facilities.

But the parks boondoggle obviously had been pre-planned, even if there was no discussion of it during Gahan's first campaign for mayor. A better way would have been to involve the community in the plan.

But Gahan's not a listener, is he?

Too much is expected of city parks. Far from transforming any essential quality in their surroundings, far from automatically uplifting their neighborhoods, neighborhood parks themselves are directly and drastically affected by the way the neighborhood acts upon them.
- Jane Jacobs, The Death and Life of Great American Cities

There is a common belief that a city park is necessary to compensate for the lack of open space urban residents have when compared to those that live on the outskirts of town. This tragic misunderstanding of the role of an urban park has caused us to overlook a prime asset in Northeast Brainerd.

A good park radiates value to the surrounding neighborhood in the same way the sun radiates heat; the closer you are, the more value the park should add. While New York City’s Central Park would be extremely valuable if it were developed, the immense value of Manhattan and the other boroughs adjacent to it would suffer if the park become a housing subdivision. The location and design of the park makes the city valuable.

At the same time, it is the city that makes the parkland valuable. If we took a piece of land in rural Iowa and re-created Central Park, it would not have any real value.

It takes people using the park to build and create the value that is then reflected back to the neighborhood. A lifeless park is the sign of a lifeless neighborhood. Fixing what is wrong with Mill Park is critical, but doing so will not restore Northeast Brainerd to prosperity. The two need to happen together.

An urban park is not compensation for a neighborhood’s shortcomings. It is a reflection of a neighborhood’s value and worth and, as such, is the most revealing barometer of success or failure the city has.

*Recomended reading: The quote from Jane Jacobs above is Chapter 5 of the book, which is all about urban parks.

Email ThisBlogThis!Share to TwitterShare to FacebookShare to Pinterest
Labels: beak wetting from the top down, downtown from the top down again, economic development, neighborhood revitalization, parks and recreation, Strong Towns (non-profit)