Grid Control, Vol. 7: What will the Board of Works do to rectify HWC's striping errors on the north side of Spring Street, apart from microwaving another round of sausage biscuits? 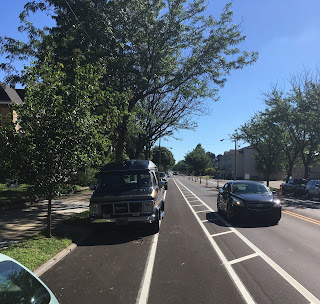 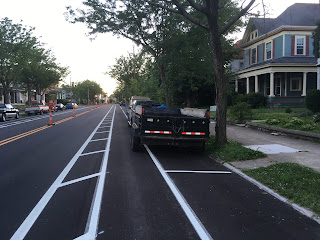 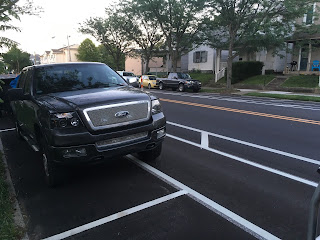 To reiterate, it appears that all "grid modernization" striping measurements were made from the south side of Spring, all the way from Vincennes to State. For whatever reason, whether by design or negligence on the part of City Hall's HWC Engineering concubine, if you park on the north side of the street, you get 6 to 8 inches less in terms of parking depth. Meanwhile, the half-a-foot greater depth is remarkably consistent on the south side.

Expect to see tires on curbs, but there's more. The cross hatching (buffer stripe scheme) is "aimed" the wrong way on the north side of Spring. The lines should be giving at least the subliminal signal that you should keep your west-moving car to the left of the buffer, but as painted, they imply that you should veer right.

The intersection of Spring and 10th literally is an accident waiting to happen, though we've already covered this bizarre bend.

Given narrower parking spaces on the north side of Spring, and with the prospect of wide vehicles like the one pictured above blithely encroaching by a foot and a half into the bicycle lane, cyclists face a far more confined route apart from the enhanced prospect of being "doored."

World class? My ass. It didn't have to be this way, did it?

As for the impression City Hall's timeless self-aggrandizing incomprehension leaves amid the "grid modernization" effort currently being implemented, here is the blog's junior editor, Jeff Gillenwater, whose Facebook comment excerpts from Friday characteristically summarize the situation.

It still blows me away that the single largest public works project in and around downtown New Albany in decades is happening in front of our house as I type and I (and everyone else) has to wait until they literally paint the lines on the street to know what it's going to be. Everyone in city government involved in the plan - administration, council, board of public works, planning department, engineering - should be ashamed of themselves ...

... Per my other post this morning, not voting for any of the minions currently involved. There's not a currently sitting council member or administrative sycophant who's deserving of public authority or money. I'll actively campaign against any of them as necessary, using their own record ...

... I was at the library earlier today and found the federally required environmental study for the street conversion-- probably a hundred pages or so in a big, thick binder. Know what wasn't included in all that (as legally mandated) publicly available information? A copy of the actual plan.

The proposal Jeff Speck submitted to New Albany included a fresh and significant biking infrastructure component that if implemented, would have made New Albany the undisputed regional leader.

At the time, NA Confidential warned you that Jeff Gahan would find a way to strip most of Speck's biking infrastructure ideas from the two-way plan, subverting the reversion into as lowest-common-denominator citywide paving project, diverting as much slush as possible into campaign finance coffers, declaring victory, and erecting another plaque to the usual suspects.

It's happening as I write, but of course there is little joy in being proved spot-on when so many opportunities are being squandered at so great a cost.

The Board of Public Works and Safety dozes tomorrow morning. Delusional excuses are to be expected, but the most important question: Will the feet of engineers and contractors be held to the fire, and these striping errors corrected?

Or, as usual in New Albany, do we condone incompetence? Don't look for admissions of responsibility, as these would imply City Hall conceding error, and that's something a garden variety flawless Dear Leader simply cannot do.

Grid Control, Vol. 4: But this actually isn't a bus lane, is it?