Amid the inevitability, as we debated the suitability of pseudonyms like "bump" and "nudge," City Hall proved that in spite of perennially stunted bunker staff vocabularies, it can play the propaganda game adeptly:

George Orwell would be so very proud. Proactive protection! Like a condom to guard against what's going to happen, anyway. 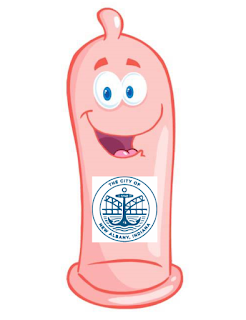 In other words, we're safeguarding you against "increases" (not even bumps or nudges) by regulating rate "changes."

Timeless and masterful fecal matter from the business end of a male cow, although I'd like to know how much the imported ghostwriter cost. After all, they're nowhere near this clever, are they?

Okay, okay. I know, so on to Door Number Two.

Representatives of the usual engineering suspects and a handful of civic appointees were on hand at the council meeting to reiterate the municipal party line: As it pertains to stormwater, those Mt. Tabor area residents who insist on trusting their own two eyes instead of the mayor's should be ignored, and The Plan allowed to proceed.

And it probably will, but CM Blair's principled resolution carried, and there will be a stormwater study. It's a rebuke of sorts to the Dear Leader, but he can take heart in the unswerving loyalty of councilmen McLaughlin and Phipps.

Can someone loan me a bucket?

Echoing Hemingway's description of the bottle, a bucket is an agent of sovereign action. You can use it to bail stormwater runoff, vomit into it or toss it a timeserving functionary.

Study to look at Mount Tabor Road project impact on flooding in New Albany, by Elizabeth Beilman (N and T)

NEW ALBANY — A stormwater study initiated by New Albany City Councilman Scott Blair will determine whether flooding will worsen for Mount Tabor Road residents because of a nearby road reconstruction, though project officials assure that it won't.

Blair, whose district includes the project area, brought the proposal to the council last week, when it passed with a 6-2 vote. Councilmen Pat McLaughlin and Greg Phipps voted against it.

"This has been a long-term issue," Blair said Tuesday. "A lot of folks who live in the Farmgate neighborhood have experienced flooding in their homes and their back yards."

Would have been nice if the paper had asked Pat and/or Greg why they voted against it.