Mead, Baldwin, and the general problem of capitalism. 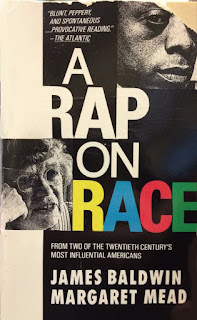 The book A Rap on Race is out of print, and Amazon will sell you a used paperback for $88.00, but fortunately relevant excerpts are surveyed at Brain Pickings, a fine portal that I was unaware existed until now.

“Democracy should not mean the leveling of everyone to the lowest common denominator. It should mean the possibility of everyone being able to raise himself to a certain level of excellence.”

Three years before E.F. Schumacher laid out his seminal vision for a Buddhist approach to economics, urging us to stop prioritizing products over people and consumption over creative fulfillment, two other titans of thought shone their luminous intellects on the dark underbelly of capitalism and consumer culture. When Margaret Mead and James Baldwin sat down for their remarkable public conversation in August of 1970, the transcript of which was eventually published as A Rap on Race, they explored with great insight and dimension the many factors that shape the forces of equality and inequality in our world — the world of 1970 and doubly so the world of today, for such was the prescience produced by cross-pollinating these two formidably fertile minds ...