"The Death of Mr Lazarescu." 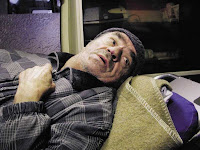 "The Death of Mr Lazarescu" is a much acclaimed Romanian film from 2005 that chronicles what may or may not be the final eight or so hours in the life of an otherwise anonymous, declining 62-year-old Bucharest alcoholic.

The plot is simple. Mr. Lazerescu, a pensioner and resident of one of the Romanian capital's high rise apartment blocks, is taken ill. When the ambulance finally arrives, he is taken on an increasingly grim tour of municipal hospitals by a paramedic who is oddly determined to see the drugged, confused and increasingly incoherent old man treated even if the universal reaction to his condition is dismissive; after all, he's just a superannuated drunk, and hardly worth anyone's effort.

Along the way, we learn a bit about Mr. Lazarescu's hermetic life, indifferent family and quarrelsome neighbors, but see nothing of external Bucharest save for nighttime traffic on the city's crowded thoroughfares.

And so the dying man is shuttled from one hospital and mishap to the next, and the 2.5-hour film, which is hand-held realist and almost documentary-like in format, is unsparing in its depiction of a medical system that while vastly improved since Communist times, remains underfunded and overwhelmed. But if the periodically comedic aspect is jet black, the uncooperative doctors, bored staffers and nearby bureaucrats are cast in shades of gray. They're not so much evil as victims themselves.

There is rampant pettiness and a noticeable absence of the sort of screen-written heroism that mars television medical dramas, yet these are counterbalanced by acts of gentleness and kindness. The last scene is replete with metaphor about rituals of death and dying. I'll not ruin it for you, but merely note its symbolic simplicity and power.

Although "The Death of Mr. Lazarescu" is long, it did not bore me. The doomed old man's plight aroused a plethora of buried emotions pertaining to my late father's experiences during his final weeks, especially the descent of both patients into dementia – the film's depiction was much compressed, and the time frames are very different, but the effect indicative that the wounds beneath my scabs are still fresh almost seven years later.

When I began writing this review, I thought I'd address those memories. Now I know I can't, at least yet.

The film is disturbing, warm, harrowing and funny.